The Forge of Fire is a quest given by Pyrus, the Pure Spirit of Fire located in the room [7,-1], in the Mine, which is the room containing the second Golden Box. 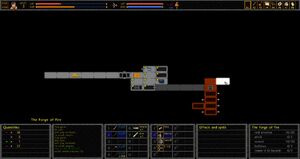 The Forge of Fire Quest Location on the map. 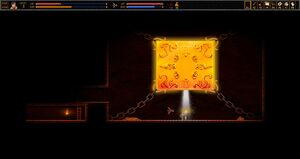 The Forge of Fire room. 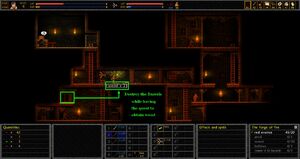 The Forge of Fire: dropping wood. 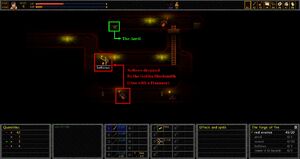 The Forge of Fire: Anvil and Bellows 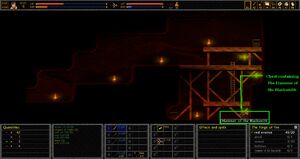 The Forge of Fire: the Hammer of the Blacksmith 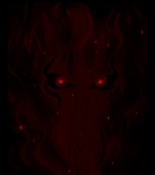 Pyros, the Pure Spirit of Fire
Add a photo to this gallery

You have found the second golden box containing Pyros, the Pure Spirit of Fire.In order learn the magic of Fire, he must forge this knowledge  the same way mortals forge the metal. To do that, he will need tools of the smith:

As Pyros told you, you will have to gather 5 types of items for him. You can get everything you need in the Mine.

By completing this quest, Pyros will grant you with his knowledge: The Fire Magic. (It will be added on your character page, at the level 1).

You will also receive the tome of firebolt (Fire spell level 1) and some exp points.

If you press action on the anvil while not having the quest, Daniel will tell you:

If you press action on the chest containing the Hammer of the Blacksmith, Daniel will tell you:

"There's a hammer here. It's beat up pretty badly. Probably used by a blacksmith. "

Daniel : "Ka'plah! I am a servant of Harnakon, he sent me here because you have something to offer me. "

Pyros : " I am Pyros, the pure spirit of fire. I will be honored to gran you the secrets of flame. "

"To grant you my knowledge, I must forge it in the same manner that mortal forge metal. I will need the tools of the smith to carry out this task. "

"I need you to obtain the following items: "

"The essence of red magic.

Many creatures bear this essence: it is the power of flesh and blood. Bring me the essence of 20 creatures. "

Symbol of strength and resistance, the anvil is punished with every strike of the hammer, yet emerges unscathed. "

A great fire coaxes into surrendering its form. Bring me at least 30 wooden planks. "

As heartbeats give strength to the warrior's soul and muscles, the continous pulse of a good bellows fans the flames of fire. "

The hammer is the hand that sculpts, the tool that brings shape to life, the arm that bends the incandescent mass to its will. Find the Hammer of the Blacksmith. "

If you use an augury scroll while having this quest active, the narrator will tell you:

"Necesserary items to finish the quest will appear on the map. This only works with explored rooms. "

"The Two Swords Icon indicates that you have to kill monster to obtain an item. "

"The Chest Icon indicates that an item needs to be collected for the quest. "

"The Highlighted Icon indicates the active quest you're following in the quest panel. Otherwise, dark icons belongs to quests that you're not following. "

Pyros : "Magnificent! You obtained all the materials!

Let the knowledge of the power of fire fill you consciouness That which was once scribbled and indecipherable symboles becomes the words of true power. Fire is a very destructive power, use it wilth caution. "

Narrator : "The magic of fire has been added to you character page. You are now able to use fire spells and increase your skill in fire magic when gaining levels. "

Retrieved from "https://unepic.fandom.com/wiki/The_Forge_of_Fire?oldid=6139"
Community content is available under CC-BY-SA unless otherwise noted.