A Dream Comes True is a quest given by an old goblin soldier in the room [7,-6], in the Mine. 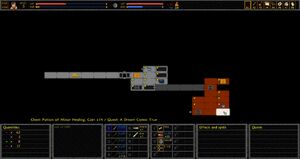 A Dream Comes True on the map. 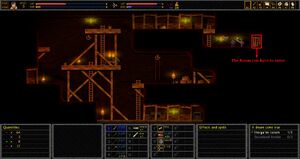 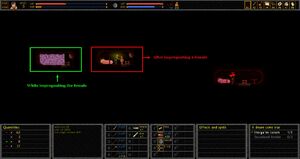 A Dream Comes True: In Action ! 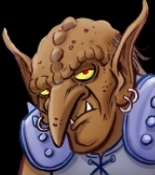 The old goblin soldier.
Add a photo to this gallery

Once you have it, you will be able to impregnate the three goblin females.

Go in the room at the right of the old goblin soldier. Go downstairs and fight the Goblin Champion.

Be careful for this fight he is strong:

Once you killed him, he will drop the Horga'hn Totem. Then you will be able to impregnate the female by pressing action while you are in front of her. You have to do it three times, one fo each female. Once you have done it, the little hearts will disappear from the one you have already impregnate.

Besides being satisfied, once you have talked to the old goblin soldier after finishing the quest, he will give you the Unique Weapon: the Horga'hn Axe. You will also gain some exp points.

If you press action on a goblin female while not having the quest, Daniel will tell you:

"She's short but she's got a really nice figure. And she's givin me THAT look. "

Zera : "Ah ha!! He mistook you as a stallion candidate. It is matin season of these stupid creatures and females lock themselves in their bedchambres while males fight to become the alpha male. Most certainly, there is a champion waiting to fight for the honor of wearing the Horga'hn. "

Zera : "The Horga'hn is the sacred totem of fertility of those lamentable creatures. It is pathetic. The stallion shows it to females in heat and they go crazy. As you should imagine, it is a rediculous and lamentable show. "

Zera : "Certainly stupid, haha! You shall see the disappointmement in his face as soon as you reject his invitation. "

Old Goblin Soldier : "Go though door and go down. "

Zera : "So you are lust full and yet they are not of you race! "

If you press action on a goblin female while having the quest but not the Horga'hn Totem, Daniel will tell you:

"Without that totem, there's no way I'm getting any. "

If you use an augury scroll while having this quest active, the narrator will tell you:

"The goblin champion that wields an axe has the Horga'hn totem. You must slay him to get it. Once you have the totem you can go to the females and 'finish' you mission."

Old Goblin Soldier : "I conglurate great male! How was the impregnation? "

Old Goblin Soldier : "You great champion. You shall receive the Horga'hn Axe. "

Retrieved from "https://unepic.fandom.com/wiki/A_dream_come_true?oldid=6090"
Community content is available under CC-BY-SA unless otherwise noted.